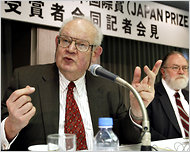 Benoit B. Mandelbrot at a conference in Tokyo in 2003.

His death was caused by pancreatic cancer, his wife, Aliette, said. He had lived in Cambridge.

Dr. Mandelbrot coined the term â€œfractalâ€ to refer to a new class of mathematical shapes whose uneven contours could mimic the irregularities found in nature.

â€œApplied mathematics had been concentrating for a century on phenomena which were smooth, but many things were not like that: the more you blew them up with a microscope the more complexity you found,â€ said David Mumford, a professor of mathematics at Brown University. â€œHe was one of the primary people who realized these were legitimate objects of study.â€